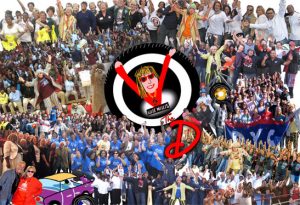 In 2013, Grammy, Emmy, Tony, and Webby award-winning and nominated songwriter, artist, director, performer, party-thrower Allee Willis wrote a song for her beloved hometown of Detroit and with her collaborator, Andrea Alexander, went back and recorded it at 70 sing-alongs all over the city with anyone who wanted to sing or play on the record – more people than have ever been the original artist on the record before in history.

The record and accompanying micro documentary were made against impossible odds – no budget other than Willis’s ever-withering pockets, a rag tag production team that came together just 24 hours before she was going to have to pull the plug, every recording engineer warning her that a record could never be made the way she intended to record it, and the fact that despite her songs selling over 60,000,000 records Willis has no idea how to play, read, or notate music.

Back in Willis’s studio in Los Angeles they also recorded a slew of famous Detroit born singers and personalities. Over the next three and a half years, they pored over 5000 tracks of vocals and instruments and over 1000 hours of footage to complete the project.

Written in the spirit of her biggest hit, the seemingly immortal “September” by Earth, Wind & Fire, “The D” is meant to serve as the official unofficial theme song to accompany Detroit’s rapid reinvention, a testament to the motto Willis lives by, “From the ashes come the miracles”.

Unhampered by anything that hit them before – threats of bankruptcy, notices of water being shut off, and much of the world counting them out for decades, thousands of Detroiters rose in a massive choir pride, joy and funkiness in evidence that the SOUL has never left the Motor City and the beat without question goes on…

“The D” premieres at the Detroit Institute of Arts September 28, 2017. FREE TICKETS to the party here!

“Her hits have been the soundtrack for many of our lives. Now Allee Willis is taking her gift for songwriting and her devotion for her city a bold step further—by creating “The D”, a love song for Detroit and a new theme for the Motor City’s resurgence with an accompanying mega-tribute party of historic proportions… Arguably one of the most ambitious displays of love and support for Detroit by one of its own.”